Little changed on the index from last week.

Technically bullish but price action is neutral and between the shorter period EMA’s.

Last week the June futures were considered technically bearish but not a technical sell due to the market divergence. Price rallied, held at the USD 11,410 resistance and is once again testing the lows.

Again, this market is not a technical sell as we remain in the support zone with a high probability the market will once again diverge.

The Q3 broke resistance by just USD 2 before selling off back into the range with price action continuing to be non-directional.

The Cal 19 futures has produced a bearish divergence on the new high resulting in the market pulling back and making a lower low. the big question for the Cal 19 futures remains, do we remain in a leg 4 corrective phase, or have we begun a leg 5 bull wave? The near term technical would suggest that based on the lower low we should see a market pullback in the very near term. However, pullbacks that hold above the USD 10,959 Fibonacci support would suggest we are in leg 5 bull wave.

Below this level would imply the market remains corrective.

As noted on last weeks report the Supramax index remains in a bullish environment but the moving averages had flattened out indicating that the market was showing neutral tendencies.

Unfortunately, this seems to be the case, with little change in price action on the index which remains between the 8 and 21 period EMA’s. A close on the weekly chart above USD 11,165 would have bullish implications going forward. Likewise, a close below USD 10,954 would indicate that the weekly technical is starting to weaken. 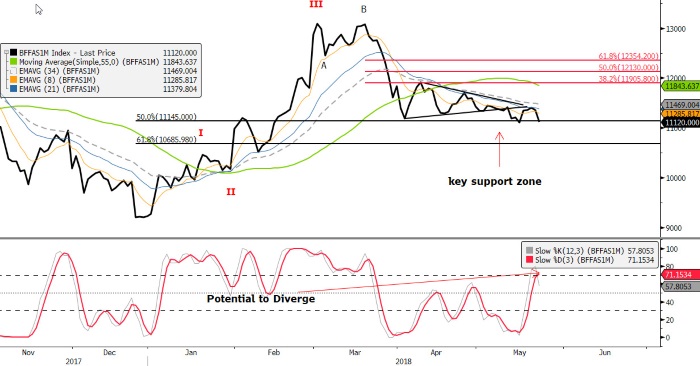 Last week we highlighted that the June 18 futures were technically bearish, but not a technical sell as the we were seeing a bullish divergence on the 50% Fibonacci support.

Support held, with price action moving up to the 21 period EMA to within USD 10 of our first resistance.

The June futures remain bearish with price looking to test the lows once again. However, from a technical perspective we find ourselves in the same place as last week as the futures are not a technical sell.

Price action continues to test the top of the support zone highlighted last week on the chart.

The stochastic is interesting as it has risen fast and is currently at 71. In theory this is overbought and would suggest the futures should weaken. However, a close below USD 11,100 would create a fresh market low meaning there is a high probability we could produce another bullish divergence, as at 71 it has a long way to travel considering the futures only need to move USD 21.

For this reason, although technically bearish, the market is not a technical sell. 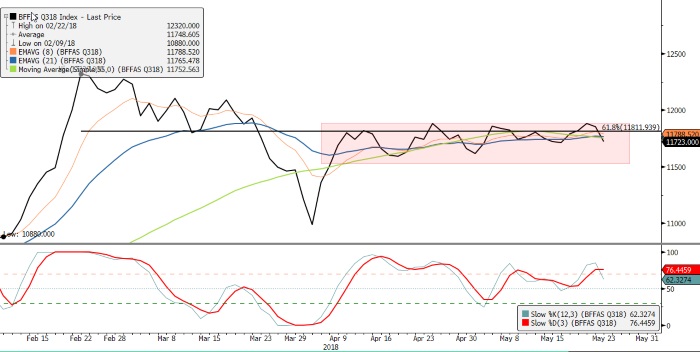 The Q3 futures closed outside of the range by just USD 2 before selling off, indicating that this market remains neutral within its range.

Technically the Q3 have made a new high, however the pullback has been deep and has the potential to produce a bullish divergence if we close below USD 11,713. The bullish divergence is not a buy signal but a warning that downside momentum is weakening
suggesting we could struggle to break range support.

Price action remains neutral having been in a corrective phase. Technically this market either remains in a Leg B correction or the early stages of a leg 5 bull wave. However, until we see a definitive breakout in either direction price action remains Non – directional. 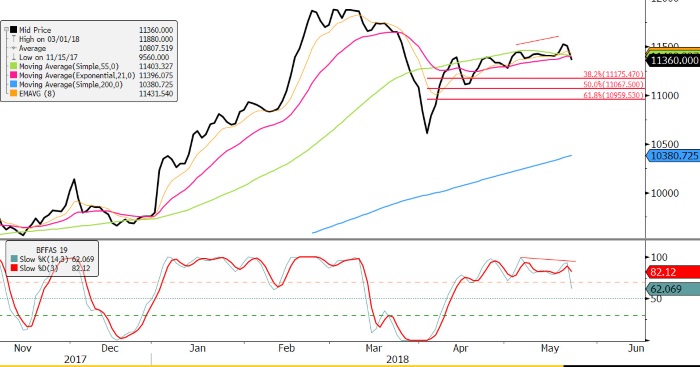 Last week the Cal 19 was technically bullish but below the 55-period MA. The futures went on to make a new high which resulted in a bearish divergence with the stochastic. This resulted in a market pull back.

We have now seen a close below the USD 11,380 support, creating a fresh market low which has neutralized the current bull move. The lower low is technically bearish indicating we could see a price pullback in the near term.

From an Elliot wave perspective, we appear to be on a longer-term leg 3 (Weekly chart, bull wave) and within that cycle (daily chart) either in a leg 4 corrective phase, or have already begun the leg 5 bull wave.