World oil indexes have been changed irregular during the week. The supportive factors were OPEC+ cuts and global oil demand growth, as well as Venezuela oil production decrease and worries that U.S. President Donald Trump may pull out of the Iran nuclear deal. Meantime, the historic meeting between the leaders of North and South Korea has taken away one source of geopolitical risk.

MABUX World Bunker Index (consists of a range of prices for 380 HSFO, 180 HSFO and MGO at the main world hubs) demonstrated slight upward trend in the period of Apr.26 – May 03:

Compliance with the OPEC/non-OPEC deal hit yet another record high because of a 70,000-barrels per day (bpd) dip in April, putting collective production levels at 32.12 million bpd. The losses are largely the result of ongoing declines in Venezuela, plus deteriorating pro-duction from aging oil fields in Angola. The strong cohesion among OPEC’s other members helped push the group’s compliance rate in April jumped to 162 percent, up slightly from March.

Venezuela’s output has plunged below 1.5 million bpd, down 600,000 bpd since 2016. The country is in crisis and the recent crackdown on Chevron employees in the country presages more production declines, particularly if the remaining private companies start to cut back on their personnel and spending.

North Korean leader Kim Jong Un and South Korean President Moon Jae-in announced they would work with the United States and China this year to declare an official end to the 1950s Korean war and seek an agreement to establish permanent and solid peace in its place. The declaration included promises to pursue phased military arms reduction, cease hostile acts, transform their fortified border into a peace zone, and seek multilateral talks with other countries including the United States. The market is trying to determine whether the symbolism-laden meeting can eventually lead to a deal with the U.S., finally resolving the escalating nuclear tension on the peninsula.

The approaching May 12 deadline and the very real possibility that President Trump will not grant Iran another waiver has kept fuel prices supported in recent weeks. French President Emmanuel Macron earlier last week predicted President Donald Trump will exit the Iran agreement, while U.S. Defense Secretary Jim Mattis said on Apr.26 that a decision on a withdrawal hasn’t been made.

Meantime, Israel is claiming that Iran lied when it said it did not have a comprehensive program to design, build, and test nuclear weapons. As per Israel, Tehran’s Project Amad was designed to produce five warheads, each with a 10 kiloton TNT yield—warheads that could be placed onto a missile. Potential Iranian sanctions could add between $2 and $10 per barrel to oil prices this year. At the moment traders are unwilling to sign contracts for Iranian crude and re-fined products that would be valid after May 12.

In response to the heavy bombardment from Saudi air strikes, Yemeni rebels have stepped up missile attacks on Saudi oil assets, although without much success to date. On Apr.23, Houthi rebels fired missiles at a Saudi oil port near the Yemen border. The missiles were intercepted, but the increased attacks raise the prospect of some sort of damage to Saudi oil infrastructure. For now, this is having no effect on supply, but a successful attack would add a significant risk premium to fuel prices.

After a brief outage, Libya’s Es Sider export terminal resumed shipments. A pipeline suffered damage from an explosion on Apr.21, leading to a temporary outage of 80,000 bpd, but the pipeline has since been repaired. Separately, Libya’s eastern military leader, Khalifa Haftar, returned to the country after a hiatus in France for medical treatment. His absence fueled speculation about a return to instability, which threatened new oil supply disruptions.

Booming U.S. production also have a negative impact on price developments. It rose to a record of 10.62 million barrels per day (bpd), a jump of more than a quarter since mid-2016. The United States now produces more crude than top exporter and Saudi Arabia, the biggest producer in the Organization of the Petroleum Exporting Countries (OPEC). Only Russia pumps more, at around 11 million bpd. Yet it is possible that the U.S. will overtake Russia relatively soon: since the start of 2018, daily production has grown by more than a million barrels.

Meantime, U.S. oil exports also hit a record high, a sign that the shale boom will continue to lead to higher shipments abroad, despite some infrastructure bottlenecks. Last week, the U.S. averaged 2.3 million barrels per day in crude oil exports, the highest average for any week on record. The surge in exports is being driven by several factors but the most obvious is the rapid growth in U.S. shale production, with shale drillers adding new supply at a high rate. Another reason for the upward trend in exports is the renewed price differential between Brent and WTI.

Russian oil shipments to ports on the Baltic and Black Seas are set to decline by 19 percent in the first five months of 2018 compared to a year earlier. At the same time, oil shipments via pipeline to China have surged by 43 percent. European refiners, in turn, will have to buy up more oil from the Middle East and the U.S. – the factor which may support fuel indexes at that very moment. Europe was the destination of 7 percent of all U.S. oil exports in 2017, but that percentage has now increased to 12 percent this year.

In China at least six state-owned and private oil refineries will shut down in May and June for maintenance. The pause could result in a 10 percent decline in refinery runs, or about 1.09 million barrels per day, which could temporarily hit China’s demand for crude oil imports.

The list of supporting factors for oil/fuel indexes continues to grow, including potential renewal of U.S. sanctions against Iran and falling output as a result of political and economic crisis in Venezuela. We expect bunker prices may continue slight upward evolution next week. 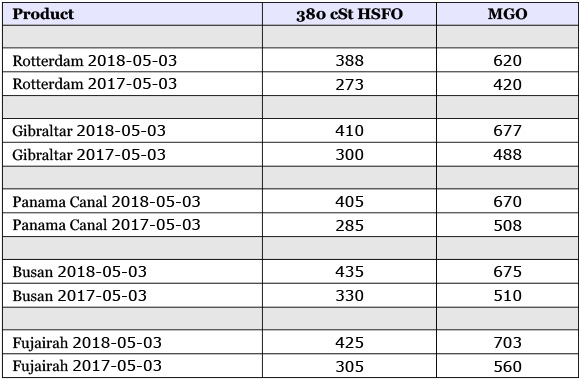